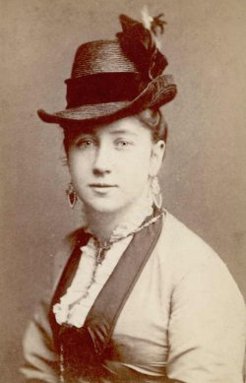 Maggie Moore (April 10, 1851 – March 15, 1926) was an American-Australian actress born as Margaret Virginia Sullivan. She met and married producer J. C. Williamson in the U.S. and became popular as an actress in their production of ''Struck Oil'', which premiered in 1873 and was revived many times. Soon after their marriage, they took the play on a tour of Australia. It was such a success that they stayed there, where he founded the most successful theatrical company in Australia, and she became a leading actress.

Moore was also successful in Williamson's Gilbert and Sullivan operas, other operetta productions, and other stage pieces. She continued a busy acting career in Australia and on tour worldwide, ending her marriage with Williamson and later marrying actor Harry R. Roberts. She retired in 1925 and moved to San Francisco. Provided by Wikipedia
1